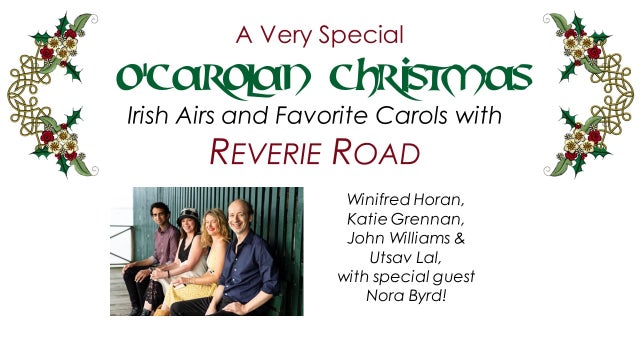 Join us as the supergroup Reverie Road comes to Grace for a special Irish Christmas Concert, influenced by the beautiful airs and dancing tunes of Ireland’s famed 16th century harper Turlough O’Carolan.

Delivering the lilt and lift of Irish music, Reverie Road features Winifred Horan with Katie Grennan, John Williams and Utsav Lal to bring an unforgettable evening of beautiful airs, driving dance tunes and tradition-based songs. With decades of experience in studios to stages, festivals to films, these artists—each one famous in their own right—bring together their well-honed musicianship from their individual stints in Solas, Gaelic Storm, Dreamworks Films, and Carnegie Hall. The result is absolutely joyous.

For this concert the band will be joined by special guest singer Nora Byrd, a Chicago native who is well-known in traditional Irish sessions all around Chicago for her beautiful renditions of traditional ballads.